Quite a nice thing has happened tonight and I thought I would share it with you all.

My late father Brian Simpson won the first ever Promenade stages in 1981. He always held the rally in high regard as it was his first ever outright win.

My dad always had a high regard of Wallasey Motor club and spoke about them a lot. I seem to recall that he was invited to a dinner dance with yourselves, My mum was very embarrased as he was the only one who turned up without a suit! My dad was never one for dressing up posh!

I have seen on your website the link to previous winners and it is really nice to see. Out of interest I remember Micky Moore winning in 1982 in the TR8. I remember my dad was leading the event until unfortunately he didn’t manage to stop for a roundabout and flattened 3 tyres!

My dad sold the rally car in 1985 to help pay for our new business premises and retired from rallying with numerous wins under his belt. He was always held in high regard in rallying and the car itself was fairly famous. It was known as the 3 wheeled Sunbeam! I also remember my dad liking the Promenade as he could lift the front wheels over the kerbs!

I actually found the car in 2002 and had to buy it! It had been stripped to a shell and unfortunately the BDG engine was long gone……………… Myself and my dad spent many hours putting right what had been done wrong on the car to try and get it back to its former glory. Unfortunately money was a bit tight with myself and I could not afford to put a BDA back in it so I chose the usual red top route. That is the only difference though! 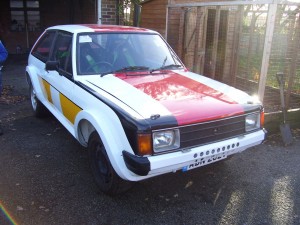 I spent many hours preparing the bodyshell to get it nice. The car was built from a brand new bodyshell by my father so their was no rot whatsoever which made a refreshing change.

Unfortunately I have children of my own and I brought them into the world of motorsport so my time on the car has been limited!

Something happened tonight though that has spurred me on to get it finished and get out there.

Over the years in the York area there have been many people competing for a lot of years and we have a lot of friends in the area. One of our friends Alan Oldfield won the 2013 Promenade outright. I am fairly sure Alan was extremely happy as it was his first outright win.

The Simpson’s and the Oldfieldsw have a long history in rallying, Alan only lives 2 miles away from me…………..

Alan came to see me in my workshop tonight and he walked in with the trophy. I was absolutley amazed too see it was the original trophy he brought that has been in existance for some 32 years and my dads name was still on there…….

It was absolutley superb to reunite the trophy to the car and fairly emotional……………………..

We have talked about the good old days of rallying all night. 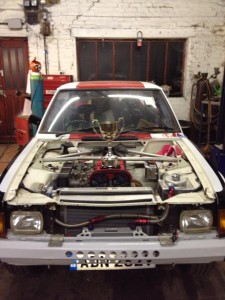 Well done to all at Wallasey motor club for keeping the event running for such a long time and for managing to hold on to the trophy year after year.

I promise the car will be doing the Promenade stages next year. (Fairly sure I wont be going for the win though! Them Darrians and millington things are quick!