The advance party opted for the first night in Barcelona to spectate SS1.  Arriving early afternoon in time to check in, have some food and a cheeky beer or two outside, the weather rapidly became monsoon like, the streets awash with flood water. Thankfully, whilst our ankles were soaked and refusing to sit inside the umbrella worked wonders although our beers took a little longer to go down as it leaked, but, what the hell, we managed, just……

Come to Spain, they said, the sun always shines…..

SS1 saw no change in the weather and having wisely followed Neil “the weatherman’s” advice that although the earlier forecast had predicted rain all night, we wouldn’t need our jackets, you guessed it, clad in only t-shirts and shorts, water wings would have been a savvy purchase as we almost drowned in the endless torrential rain! Having seen the front runners through, the sanctuary of the Oktoberfest tent beckoned and a quiet, calm night ensued. Steaming in more ways than one, every effort was made to drink with moderation get an early night-  I suspect we failed!

Friday am- still damp from the night before but well rested after 3 hours sleep, the already waning advance party returned to the airport to collect the sensible ones Gary and Andy. The wild goose chase to find our “off site” hire car then began. Having finally collected the car, a Ford Galaxy (the fastest hire car in Spain) and with team pilots Andy and Neil “where’s my coat” Evans signed on, we went back to Barcelona (the opposite direction to Salou) to find said lost coat. This was amidst the back seat driver comments of “oh, that looks nice, I’ve not been to Barcelona for ages”. With “coat gate” resolved we sped off to Salou with Gary “on the notes” Marriot up front.

Running late, we headed straight past Salou up to SS7 Terra Alta 2, the last gravel stage of the day after Jon “the catering manager” Chamberlain provided the usual alfresco late lunch of Baguette, ham, cheese, olives and crisps with the obligatory can of Estrella (supporting the local economy) helping to wash it down beautifully! 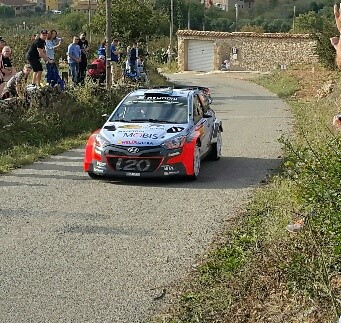 Returning to Salou late, we checked into our Penthouse accommodation and reluctantly dragged ourselves out into town for another quiet and sensible night……oh and a couple of beers!

Saturday came all too soon- the start of the tarmac days saw team WMC heading out to SS11 El Montmell 1.  Resuming my role as Tim “Gunga din” Nunn the team’s hydration expert carrying team water…….with Rich becoming the team flag bearer- a Scot with an English flag seemed fundamentally wrong but he bravely took one for the team!

After a good uphill walk into the stage in welcomed sunshine, we pitched up and claimed our spots to watch the cars off the start, again watching the top runners through whilst avoiding being decapitated by the drone, but nevertheless getting ourselves on TV in the process. It was great to see Craig Breen’s crowd appreciation, flashing his headlights and waving to the Irish flags as he gave it flat chat off the start.  Leaving the stage we then drove on through amazing scenery, relocating to a chicane in the middle of Alcover- Capafonts 2, high in the mountains. With a stage side picnic, of you guessed it, bread, cheese, ham, olives, crisps and a cheeky beer we were back off to Salou. 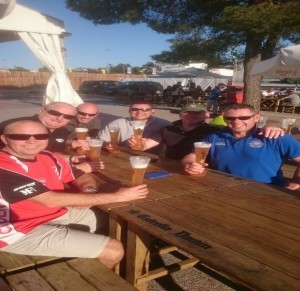 With time against us and having seen the sea front special stage the year before, we opted to return to the service park back in Port Aventura for a spot of rally car and people watching, oh and, of course a cheeky beer to round off the day just as the front runners were returning into final service of the day. The usual routine ensued, no down time, a quick phone call home to report how rubbish the trip was, a quick shower and food before the obligatory quiet night out!

After a sedate night out (and early to bed as with every night) Sunday, the final day and a quick 30 mile drive up to SS18 Pratdip 2. After watching the lead cars through, we hightailed it back to Salou to see the ceremonial finish on the sea front. This year we strategically placed ourselves close to the viewing platform that was opened to the general public the year before and were able to get prime position to watch Sebastian Ogier make his donut entrance literally in front of us to celebrate his 4th   consecutive World Championship win- we even made the podium photographs, if you look hard enough!  With Hi- fives delivered to Sordo and Ogier as they left the ceremonial finish, exhausted from the challenges of the past few days, you guessed it, a few cheeky beers, some tapas and people watching rounded off the afternoon perfectly. 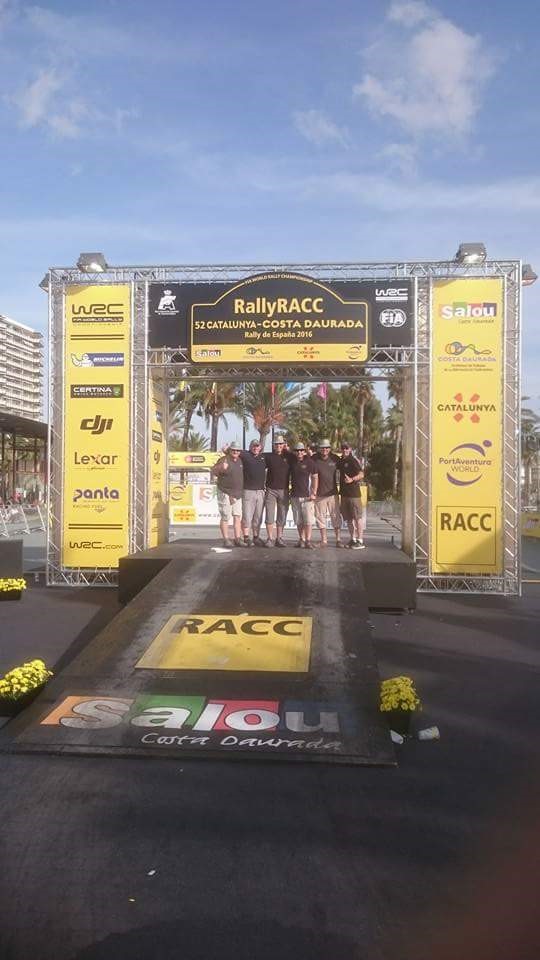 Sunday night saw us, in line with tradition rounding up the night at Danny Boys, again, for some great live music and mingling with a whole load of crazy petrol heads including a wee Irish fella called Craig Breen. At least this place was rocking unlike many others which were empty. The opportunity to help the local bin men this year was disappointingly missed by Gary and Tim who assisted with gusto in 2015…….

Monday- after a lazy start, it was time to come home…..the journey back to the airport was via Barcelona for a few hours before the flight. In true tourist mode we took a boat ride around the bay before more food and a cheeky last beer. Throughout we were all exceptionally quiet, for once!!!- I have no idea why, as we were all well rested and full of energy after such a relaxing few days…….

In summary, a pure endurance test with as much rallying we could fit in amidst beautiful Spanish scenery, loads of walking, minimal sleep, absolutely fantastic company, great craic with too many laughs to recall  for so many different reasons and oh yes, the occasional cheeky beer accompanied all too often with bread, cheese, ham olives and crisps.