Sticking with the CSCC this season, 15 th September saw the Donnington Park round. For this race, the itinerary was going to be slightly different. I had offered a drive in the race to Neil Philpotts to get him out on track and keep his hand in.

The format was for us to share the drive – a 30 min qually session where we would split the time to get some practice in and set a decent lap, and the race would be similar, 20 mins each of the 40 min race, with the pit stop / driver change in the middle. 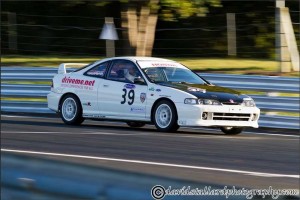 The weather was very kind, with the sun cracking the flags! Also doing the same race was Dave Hill and Andy Davies, again, sharing a drive in Daves Civic Type R. Qualifying saw us both midfield, with Dave 13 th on the grid, and myself 14th along side him; all year that hasn’t been much between us, and this qually session was business as usual lol.

So, race time came round, myself and Dave were doing the first stints, with Andy and Neil taking over at the pit stop. For the first time this year, I flunked the start, going from 1 st to 4th off the line allowing cars to stream past me, losing at least 6 places before the first corner. ¾ way round the lap I caught a glimpse of a red flag, so everyone slowed it down as we all arrived at the grid again.

It appeared that a reserve car had started the race, and they had too many cars on circuit, so stopped the race and issued a restart from original starting positions – thankfully I was going to get another bite of the cherry – this time I was sure to make sure I didn’t mess it up! 2 nd attempt was much better, made a place or 2 by the first corner and tried to get settled in behind Dave.

At the end of the first lap all appeared to be going well, Dave had a bit of breathing space ahead of me going to the final chicane as he was putting pressure on the car in front of him. Unfortunately, the CRX he was pressuring overcooked the brakes in to the chicane and Dave had to take avoiding action via the gravel trap where he was collected by the now spinning CRX! Cars seemed to be scattered everywhere, I picked my way through the carnage, and found myself 7 th at the end of the first lap.

I held this until about 15 mins in to the race when we had a safety car. Trying to make the most of this, I decided to pit, coming in to a totally unprepared Neil. We got the driver change done, but we, and everyone else who had decided to pit faced a red light at the end of the pit lane, even with the safety car 30 seconds away! Eventually the safety car passed and they let the pit lane empty, putting us a lap down, and back in 21 st place!

Neil got on it right away and started taking places pretty much everywhere he could. We eventually finished a respectable 14 th overall, not bad considering or pit stop blunder….

In car Videos can be found here…. http://www.youtube.com/watch v=NHixEud2gZ4&list=UU7N_LZ9G5kQGAcfYlxEQOCA&index=5&feature=plcp